Artifacts found on Culebra support theories of habitation by Taínos and Arawaks in pre Columbian times. A good book about the Taínos in Puerto Rico in general is 'The Taínos: Rise & Decline of the People Who Greeted Columbus'.

The Spanish named the island Isla Pasaje and in the 18th century it was mainly used by pirates to hide. For a general overview check out: 'Puerto Rico: The Trials of the Oldest Colony'

The first governor of Culebra appointed by the Crown in 1875 was a black Englishman by the name of Stevens. He was given this authorization by the Vieques government. His main responsibility was to guard the coastal fishing industry from foreigners. 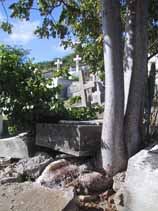 The colonization of Culebra began in 1880, commanded by Don Cayetano Escudero. The first settlement was named in honor of San Ildefonso de la Culebra, Bishop of Toledo. It was located in the area occupied now by the Department of Natural Resources, Fish and Wildlife. The cemetery is the last remaining witness of that era.

Coat of Arms: The cross and staff represent San Ildefonso. The actual name Culebra is represented by the twisting green serpent. The three tower crown represents the municipality. The gold color corresponds to the Culebra flag that originated with the Committee Pro-Defense of Culebra. Green also seen in the national shield connects Culebra to the rest of Puerto Rico.

In 1891, the town of San Ildefonso de La Culebra was described as a few houses made of straw. There was a church, a government house and a water tank from which the people got their water.

In 1894, a written report, indicating the growth and progress made by the colonists of Culebra, stated 519 residents living in five communities. The communities were named San Ildefonso, Flamenco, San Isidero, Playa Sardinas I and II, and Frayle.

The public works constructed in San Ildefonso up until the year 1894 were the following:

* Delegation House
* Church
* Public Water Tank, paid for by the government of Puerto Rico
* Cemetery
* Public Order House, made of wood and zinc with funds from Puerto Rico
* Dock, constructed over the rocks

There were 84 individually constructed houses on the island. Twenty four were located in the town of San Ildefonso and the rest were spread around the island in the other communities.

Construction materials, seeds and fertilizers had to be brought in - little has changed in that respect.

The Spanish Crown determined that the land of Culebra was public property except for the areas reserved for use of the central government. When the Spanish American war was resolved in 1898 the land was turned over to the United States government with the promise that property titles given by the Spanish government would be honored. Titled land would not be confiscated by the Military Government established in Puerto Rico. These agreements were reached in the Paris treaty and by general order number 1 of the United States of Puerto Rico's Military Government.

In 1901 the US Military arrived in Culebra to establish an area for the military to use as a firing range and to hold marine exercises. At that time they took over the town of San Ildefonso and re-established the persons living in San Ildefonso to other areas of the island. This was in violation of the Paris agreements. Two remaining stone houses built by the military in the area of the Department of Natural Resources, Fish and Wildlife are witness to that era. There is a museum in the house marked 1908.

The military stopped using Culebra as a bombing range in 1975. However, the destruction to the reefs and the psyches of the inhabitants will take decades to heal. Rusting tanks on Flamenco beach bear witness.